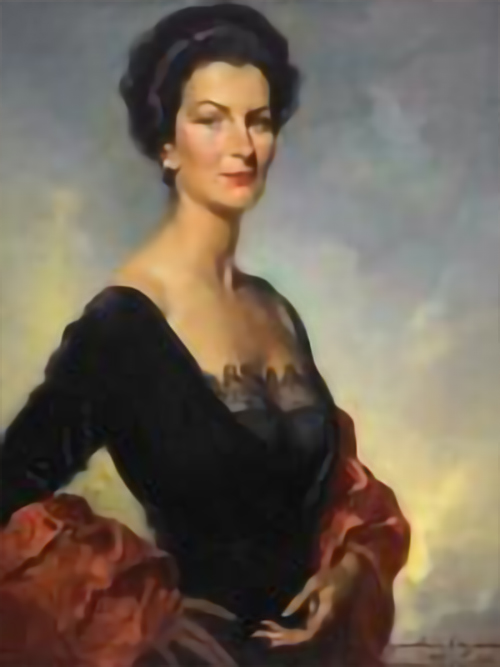 06 May Redwood History: Ladies of the Library Part III

Posted at 09:21h in Events by kristym@moonbirdstudios.com 0 Comments
0 Likes

In our final installment of the Ladies of the Library series, we finish with three women who were well documented by their contemporaries. One was personally introduced to George Washington who remarked on her grace and beauty; another was an outspoken political figure who wrote for her husband’s newspaper; and the third was a well known and well connected woman, whose son fought for the Confederacy. Despite the number of prominent men on the walls of the Redwood, there are also some key female figures that have figured into the history of not only the library, but the early formation of our country. Keep in mind, there are other portraits of important women that are not currently on display, but that reside in the holdings of the Redwood Library & Athenaeum. Look forward to a future post about these hidden women. 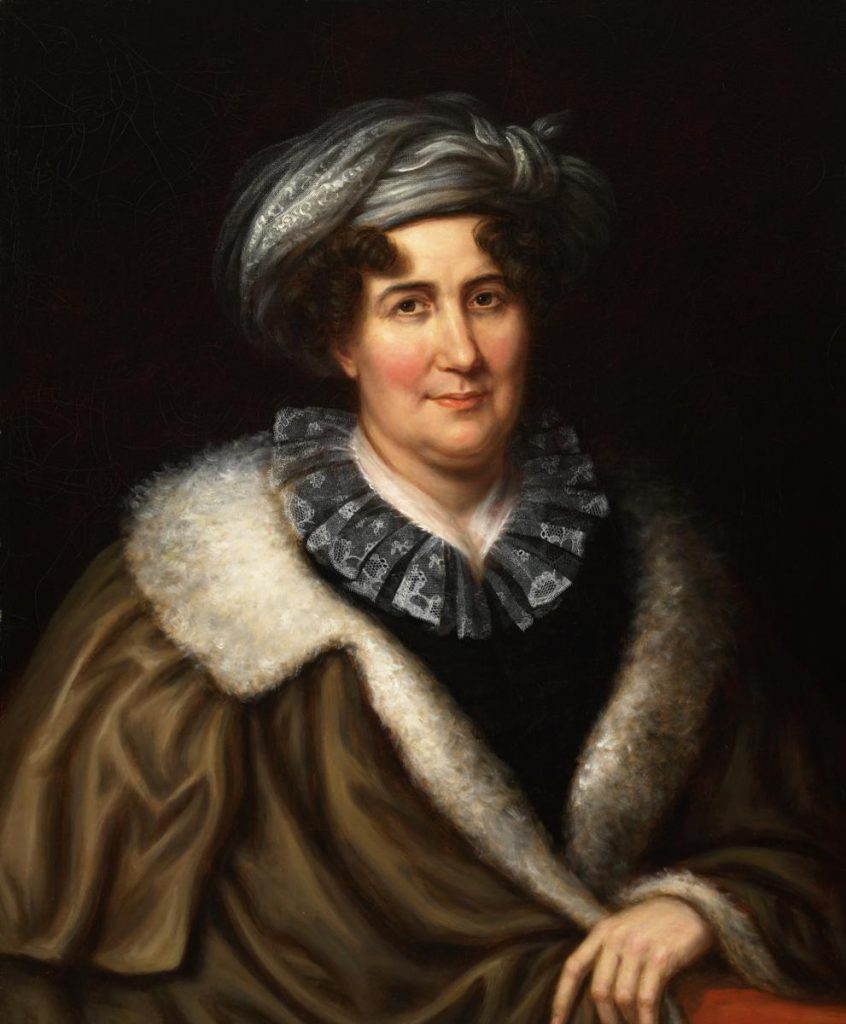 Margaret Bayard Smith was a force to be reckoned with in the nineteenth century. She was born on February 20th, 1778, while her father was with George Washington at Valley Forge. This auspicious beginning seems an indicator of the type of person that Margaret would become. She married Samuel Harrison Smith, a journalist and newspaper publisher who was a close friend of Thomas Jefferson, on September 29th, 1800. When the young couple left Pennsylvania for Washington D.C. (to follow the moving government capital), they quickly rose up the social ladder and found themselves a political power couple. Samuel established the first newspaper in Washington city, The Daily Intelligencer, and Margaret often wrote for it anonymously. Their proximity to the new President, as well as their frequent visits to the White House and other esteemed social gatherings, meant Margaret was privy to all of the inner workings of Washington society, but also that she saw the cogs of the developing country. Her letters to her sisters were later published as The First Forty Years of Washington Society. In addition to writing about politics and the culture of her city, she also wrote about progressive topics like interracial relationships and the parent-child bond over time – many of which were considered impolite and inappropriate subject matter for a woman, and passed over by her embarrassed publisher. More than just a pretty face and a keen mind, Margaret was also a great philanthropist; setting up an informal schoolroom in her house and teaching reading, writing and math to local and poor children, including African Americans. In a time when women were expected to mind the home and children, Margaret Bayard Smith was able to carve a lasting impression in history by breaking through the gender expectations of her time. This portrait was painted by Charles Bird King, and given to the Redwood by the artist in 1859. 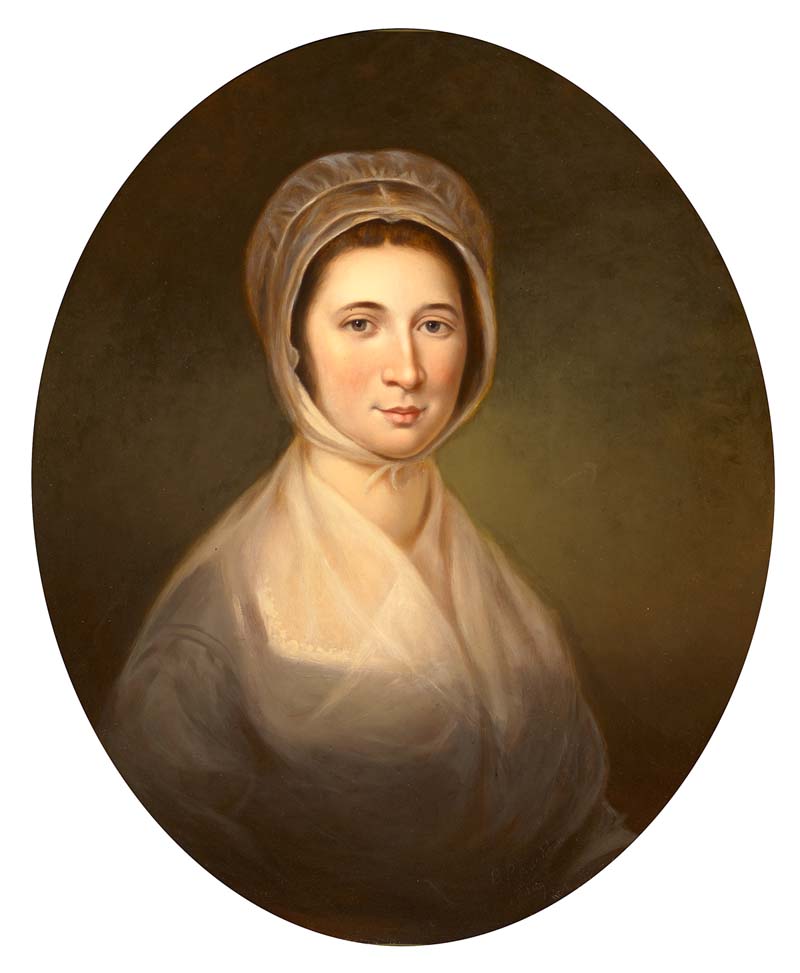 Mary “Polly” Lawton (1761-1793) was born to a wealthy Quaker family in Newport. She was introduced to many prominent men during the Revolutionary War, including George Washington and Rochambeau; all of whom remarked upon her beauty, grace and piety, earning her a place in colonial history.  She is mentioned in George Champlin Mason’s 1884 work Reminiscences of Newport, when he recounts the meeting of Polly and Count Segur.

“He had called at the house and was conversing with the father, when, to use his own words,

‘the door of the drawing-room opened, and a being which resembled a nymph rather than a woman entered the apartment. So much beauty, so much simplicity, so much elegance and so much modesty were perhaps never combined before in one person. It was Polly Leiton [Lawton], the daughter of my grave Quaker. Her gown was white, like herself, while her ample muslin neckerchief, and the envious cambric of her cap, which scarcely allowed me to see her light-colored hair, and the modest attire, in short, of a pure virgin, seemed vainly to endeavor to conceal the most graceful and most beautiful form imaginable. Her eyes seemed to reflect, as in a mirror, the meekness and purity of her mind, and the goodness of her heart; she received us with an open ingenuity which delighted me, and the use of the familiar word ‘thou,’ which the rules of her sect prescribed, gave our new acquaintance the appearance of an old friendship.’

Hazlitt has said, ‘I had rather leave a good portrait of myself behind me than have a fine epitaph.’ Polly Lawton has left to us the one, and the other was secured to her by the gallant Frenchman.”  The portrait of Polly is by Bradley Brayton Bucklin, and was given to the Library by George P. Lawton in 1876. 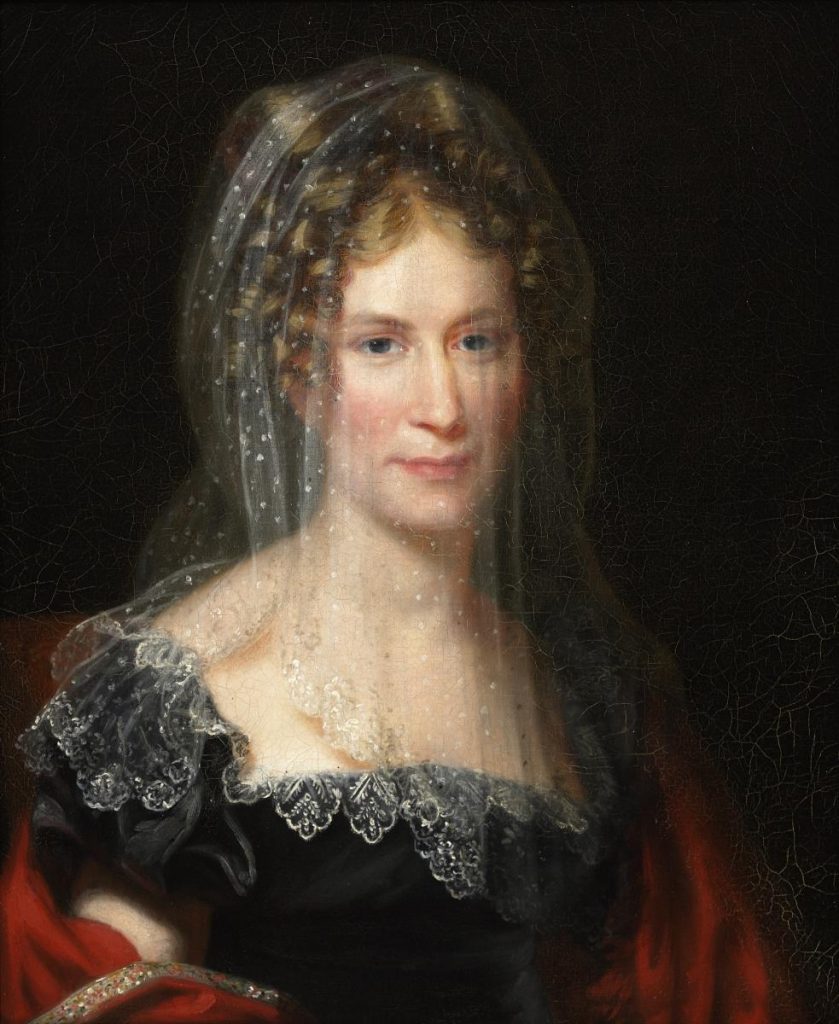 Margaret Mansfield Lovell (1788-1836) was the wife of Surgeon General Dr. Joseph Lovell. The couple had eleven children, and Margaret passed away just twelve days after the birth of her last child. One of her sons, Major General Mansfield Lovell, fought for the Confederate States Army in the Civil War, despite being raised in New York. He was the military commander of New Orleans when it fell to the Union Navy in 1862, and suffered at the hands of his countrymen, but also the Confederate government. He was charged with incompetence, since the South would not admit they had left behind insufficient troops to appropriately defend the city. Ultimately he was cleared of all charges, but his reputation was severely damaged. 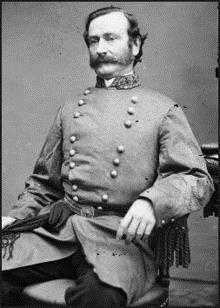