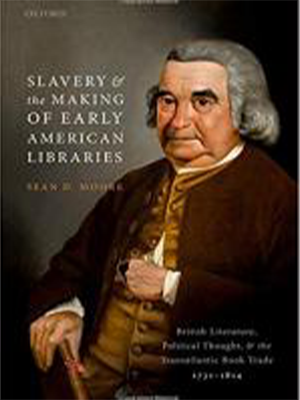 31 Jul Slavery and the Making of Early American Libraries

Posted at 17:30h in Events by hannahq@moonbirdstudios.com 0 Comments
0 Likes

Early American libraries stood at the nexus of two transatlantic branches of commerce the book trade and the slave trade.

Slavery and the Making of Early American Libraries bridges the study of these trades by demonstrating how Americans’ profits from slavery were reinvested in imported British books and providing evidence that the colonial book market was shaped, in part, by the demand of slave owners for metropolitan cultural capital. Drawing on recent scholarship that shows how participation in London cultural life was very expensive in the eighteenth century, as well as evidence that enslavers were therefore some of the few early Americans who could afford to import British cultural products, the volume merges the fields of the history of the book, Atlantic studies, and the study of race, arguing that the empire-wide circulation of British books was underwritten by the labour of the African diaspora.