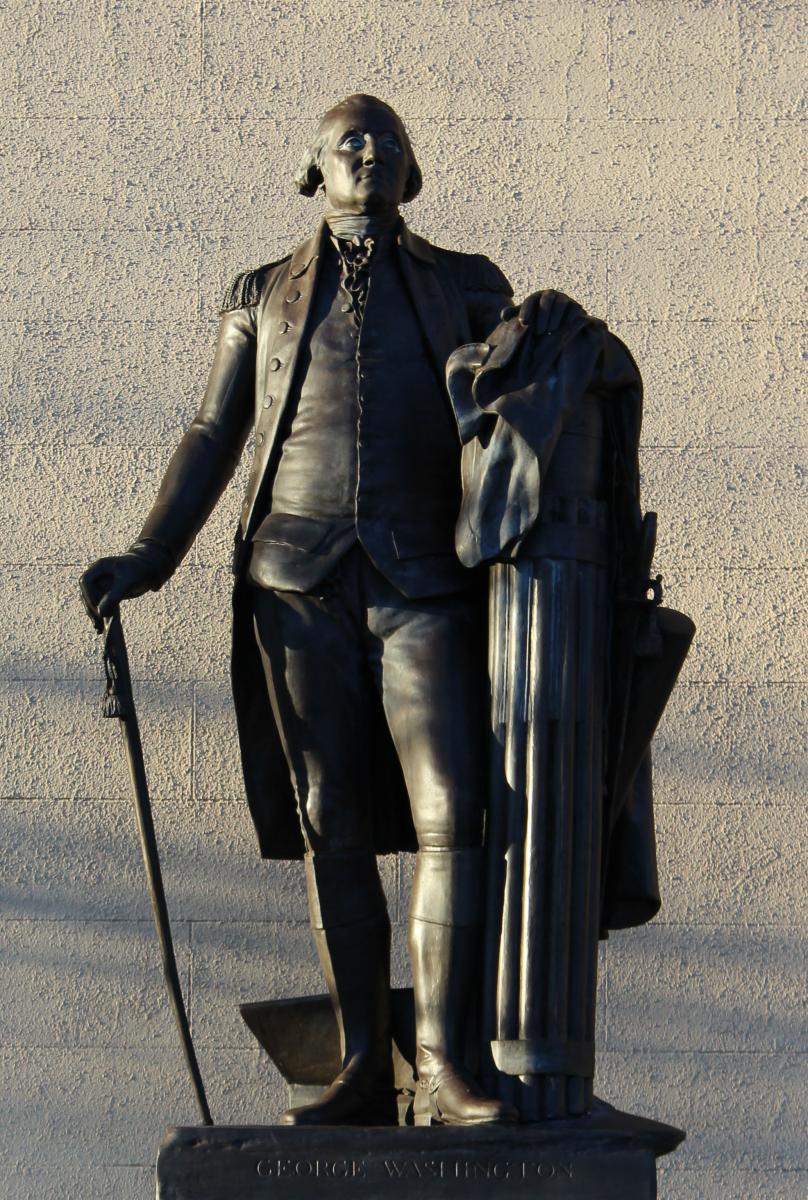 Posted at 17:03h in Events by kristym@moonbirdstudios.com 0 Comments
0 Likes

In honor of George Washington’s birthday each year, the Newport Artillery Company comes to the Redwood to give a cannon salute to our first president at the base of his statue. This particular statue has caused quite a bit of intrigue and speculation over the years, but due to recent research efforts, has become less of a mystery.

The original statue was commissioned by the Virginia government to adorn the interior of the rotunda in their state capitol building. Then governor of Virginia Benjamin Harrison gave the commission to French sculptor Jean-Antoine Houdon to create a life-sized, marble statue of General George Washington. To assist the sculptor in capturing the likeness of Washington, Harrison sent a portrait to France in 1784 of Washington, painted by Charles Willson Peale, commemorating the surrender at Yorktown. Of course, the artist preferred meeting and studying the subject in person, so a visit to Mount Vernon was arranged, and Houdon arrived in October of 1785. During his two week stay at the Washington home, Houdon took a plaster cast of his face, as well as extensive measurements of his body – all of which contributed to the striking likeness of Washington that was ultimately achieved. 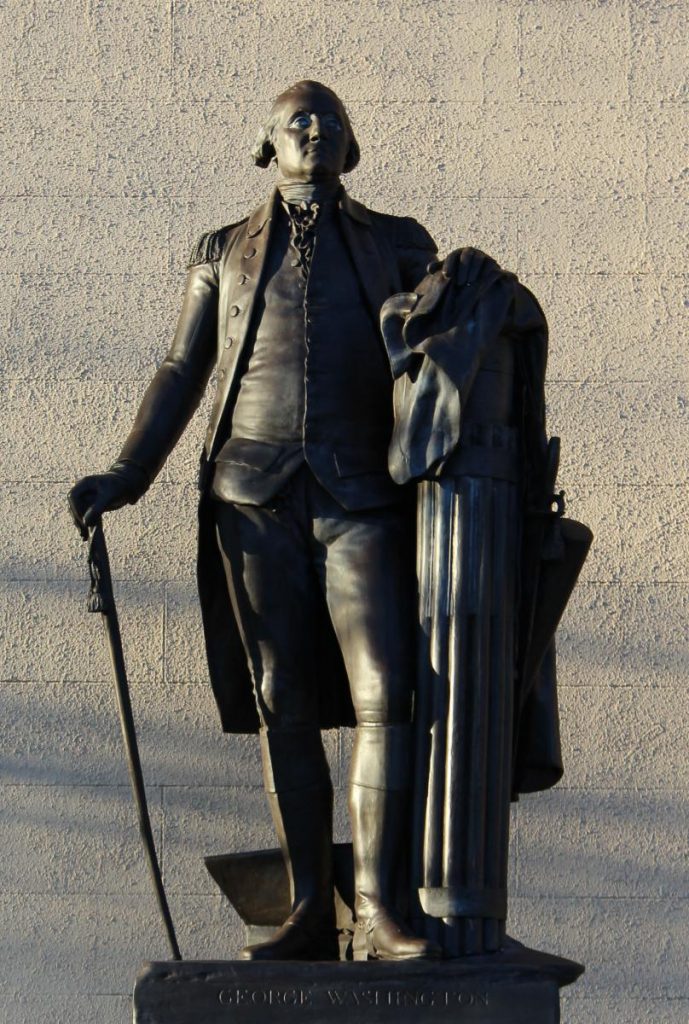 Upon returning home, Houdon was unsure how to dress his statue. A classical robe or crown did not seem appropriate, and many other artists of the time had been criticized for dressing modern subjects in classical garb. It is likely that Houdon conferred with Benjamin West during this time, as he had recently cause a scandal for dressing his subjects in modern attire in his painting The Death of General Wolfe in 1770. The decision was put to Washington himself, who chose to remain out of it, and put his entire trust in the artist.

What Houdon created is a hybrid of classical and modern monuments. Washington is seen wearing a coat modeled after the most current fashion of the time, with a relatively ambiguous uniform that is neither out rightly militant or quotidian. Instead, he is metaphorical and literal at the same time. Washington rests his left arm on a bundle of thirteen fasces – the Roman symbol for civil authority, which is also doubly representative of the thirteen colonies which came together under his guidance, and are the resting place of his sword.  Behind him rests a plow, the symbol of the farmer and working man. In his hand, he carries a gentleman’s walking stick. Washington is shown as a modern Cincinnatus – the Roman farmer and general who leaves to fight for his state, and after his victory, comes home as a man of peace and simplicity. 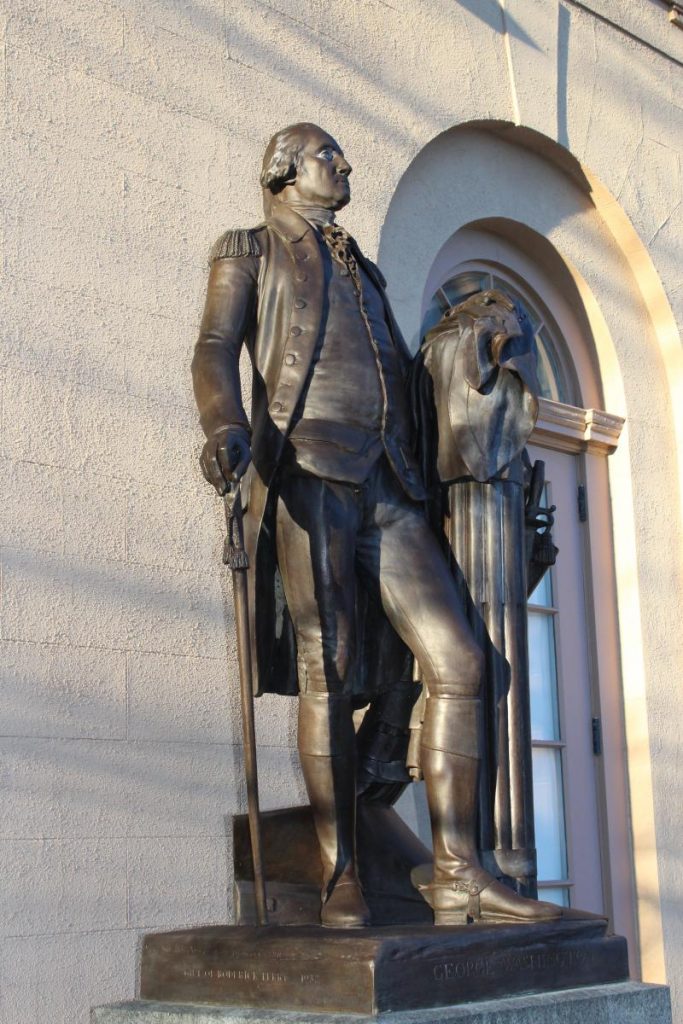 In a recent piece by the Society of the Cincinnati, they describe the Houdon statue as follows:

“He presented Washington’s person with clinical accuracy, down to the emerging double chin of a middle-aged man who had devoted the prime of his adult life to his country. His subject is clearly a powerful figure – as Washington was – returning home from war wearing but unbowed, casually putting aside his cape and laying down his sword. Yet Houdon was not attempting literal realism. He surrounded Washington with republican icons – the fasces and the plow – symbolizing Washington’s role in establishing the new nation and his self-effacing retirement from public life.”

As could be expected, the Washington statue was well received when it was installed in the rotunda in 1796. Many people were granted permission to take casts and create replicas of the original statue, but it was quickly stopped due to damage on the marble statue from the casting process.  Luckily, the Gorham Company of Providence had such permission, and was able to create a cast for the Redwood Library, which was given by Reverend Roderick Terry in 1932. 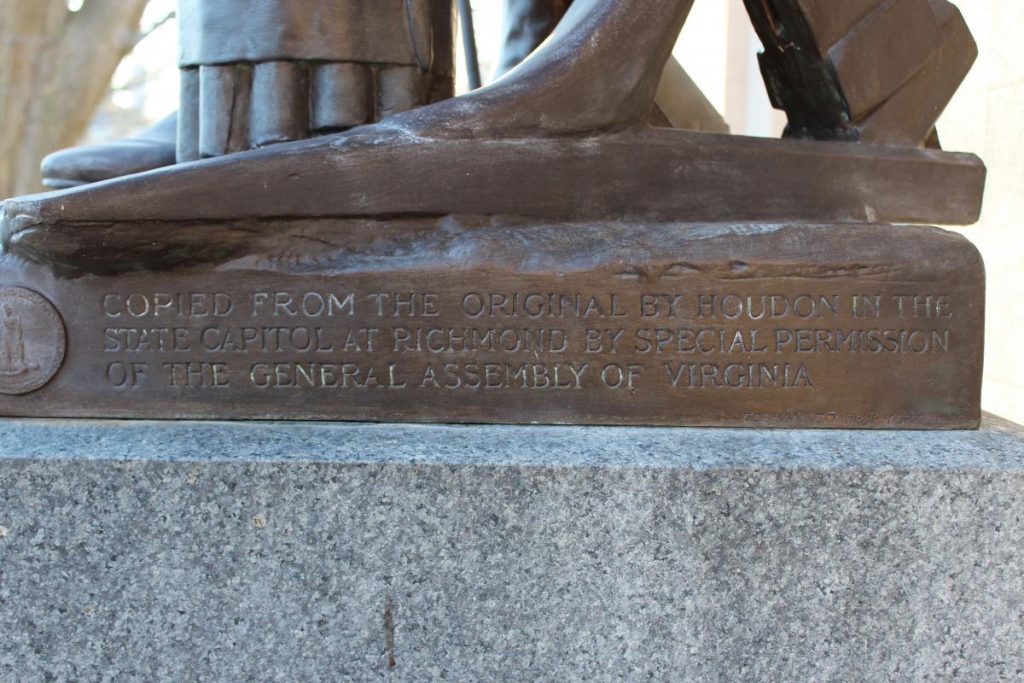 George stood proud in front of the Redwood until August 1987. A movie crew borrowed the statue for placement in front of the Colony House for their film Mr. North. At the Redwood Library’s request, Washington’s statue was only off the premises for 24 hours.  Within the past five years, the Washington statue was relocated to the side of the building on a raised patio, much to the chagrin of many patrons at the Redwood. However, it may also be noted that there is no evidence that Washington was ever inside the Library, and although his link to Newport is irrefutable, his link to the Redwood in particular, has yet to be determined.

Whether General George Washington belongs in front of the Redwood Library or not, we hope you come to join us and honor this great American hero on what would be his 284th birthday. 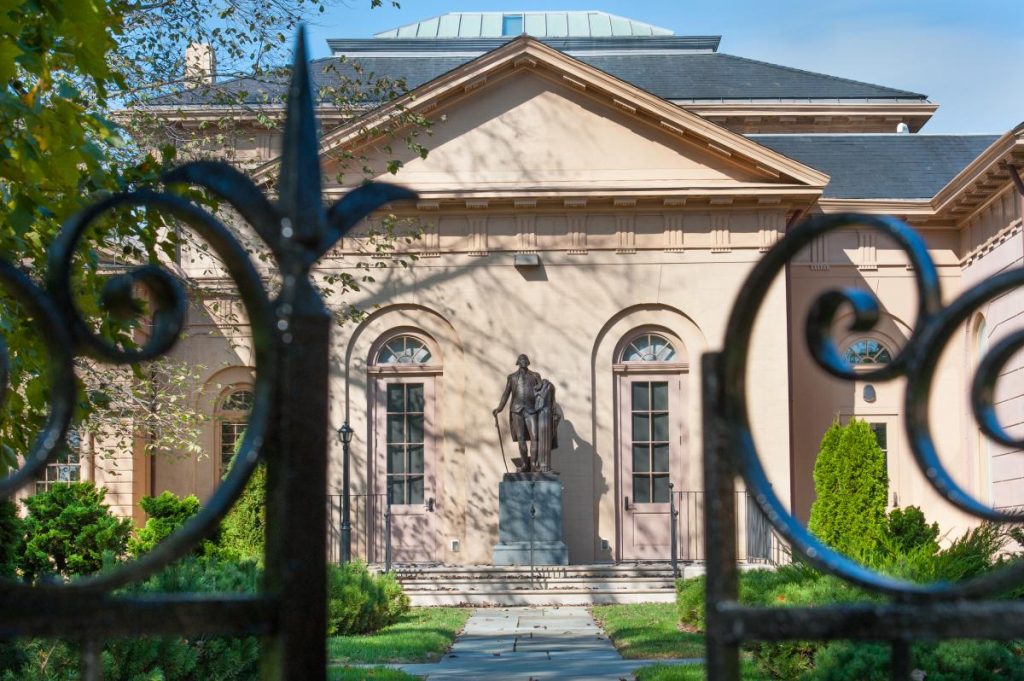