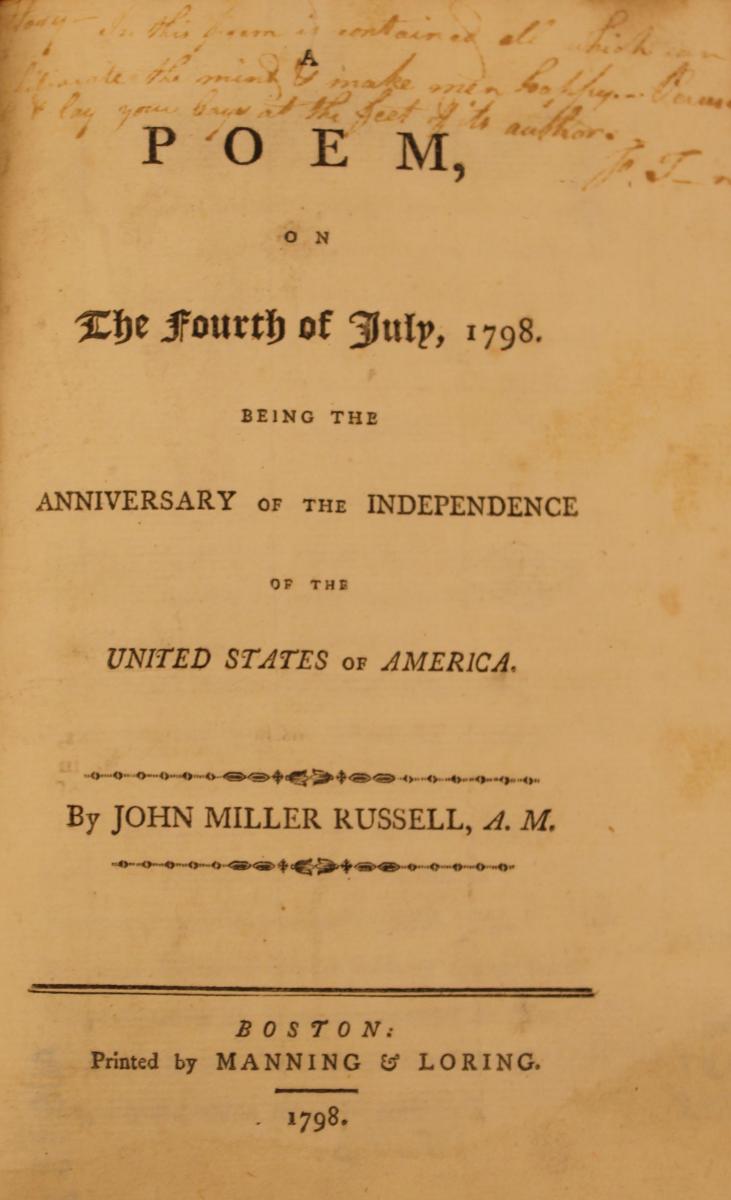 Posted at 10:58h in Events by kristym@moonbirdstudios.com 0 Comments
0 Likes

To celebrate our upcoming holiday weekend, and in order to reflect on the meaning and cost of American independence, we have chosen to feature some stanzas from “A Poem, on the Fourth of July, 1798” by John Miller Russell. This beautiful little volume was given by George Herrick, to honor the exemplary service of one of our former Directors, Cheryl Helms.  Since the poem is quite long, we have included a few excerpts, but the poem in its entirety is a hybrid of patriotism, optimism and reflection. Bear in mind this poem was only written about twenty years after the Revolution. In that first twenty years, the United States that we know today began to take shape. The nation was literally being built from the ground up among tensions and uncertainty. This particular poem seems to portray that doubt, but also the hope that the newly recognized Americans had for what they were accomplishing. Included with the poem are numerous bits of marginalia. The opening page bears an inscription that says: “Story – In this poem is contained all which can liberate the mind & make men happy. Peruse & lay your bags at the feet of its author.” We have determined that the marginalia is most likely from Reverend Joseph Tuckerman, a Unitarian clergyman from Massachusetts. “Story” whom he addresses this note to, is thought to be Joseph Story, a Supreme Court Justice, meaning this poem had quite a bit of cultural significance for its time – a clergyman, and a Supreme Court Justice sharing the same patriotic literature!

As you hit the beach, or celebrate our independence with family and friends, keep in mind what it took to accomplish that feat. In uncertain times like these, its always a good idea to reflect and remember before you move ahead. The Redwood Library and Athenaeum would like to wish everyone a safe and happy Fourth of July.

“While a vast ocean rolls it’s waves between,

And sep’rates us from Europe’s sanguine scene,

Prize well your lot, and ever be you free.

Keep peace with all the world, if in your pow’r;

Stand firm in glorious INDEPENDENCE’ cause,

Defend your country, and protect her laws.

On this our infant Nation’s natal day

Our solemn vows with gratitude we pay.

Any by the blood of heroes, patriots, shed,

Whose souls to blissful realms have long since fled,

By all that’s dear and sacred, just and fair,

By LIBERTY’s immortal name we swear,

Our country’s Independence to defend,

‘Gainst any foreign foe our force will bend.

Does Washington yet live? Our dearest friend!

And will he not some kind assistance lend?

He lives! Thank Heaven! Though far from public life,

From scenes contentious, and from party strife.

He lives! – and with a father’s anxious eye,

Beholds the brooding tempest gathering nigh.

His name will fill each heart with confidence,

And prove a tower of strength, a sure defence.

The firm, undaunted ADAMS next appears,

A sage advanc’d in wisdom and in years.

With honest zeal to serve his country tries,

His patriot labors in our nation’s cause,

His love of freedom claims our just applause.

He strives for peace; and peace he will maintain,

Long as his country’s honor bids the same.

But Independence he will not forego,

Nor let our plighted faith and justice go.

While with a nation great and haughty grown,

He strives to bring in friendship with his own,

We nought obtain, but contumelious rage,