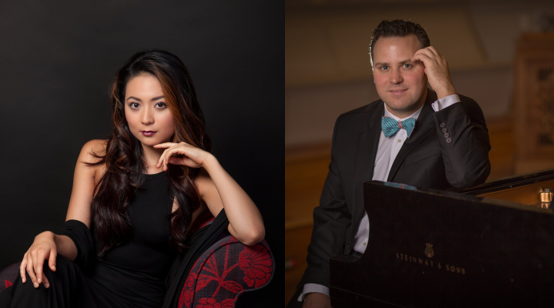 A joyful collection of piano-music for four hands by Debussy, Schubert and Mozart.

Praised as a “[musically] eloquent” (San Francisco Classical Voice) player “with the kind  of freedom, authority, and strength…that one expects from the world’s finest pianists”  and a “bewitching musical presence” (The Piedmont Post), Audrey Vardanega has  performed as a solo and collaborative pianist across Europe, China, and the United States.  She has received instruction from notable artists including Leon Fleisher, Thomas Adés,  Gidon Kremer, Robert Levin, Miriam Fried, and Jonathan Biss. She currently studies  piano with Richard Goode. She is the Founder and Artistic Director of Musaics of the  Bay, a nonprofit chamber music series dedicated to music mentorship in the Bay Area.  2019 highlights include her participation in Argentina’s New Docta Music Festival in  August 2019, her two-part Beethoven Piano Sonata Project at the Berkeley Maybeck  Studios, and the launch of Musaics of the Bay, a concert series and mentorship initiative  founded by Audrey in the Bay Area.

German pianist, Clemens Teufel has performed around the world including venues such as the Lincoln center New York, Boston Atheneum, Newport Music Festival and Shaolin Liu in Rockport. He has also given masterclasses at the Beijing conservatory in China and composes contemporary music in a post-romantic style. He lives in Boston with his wife and two children.