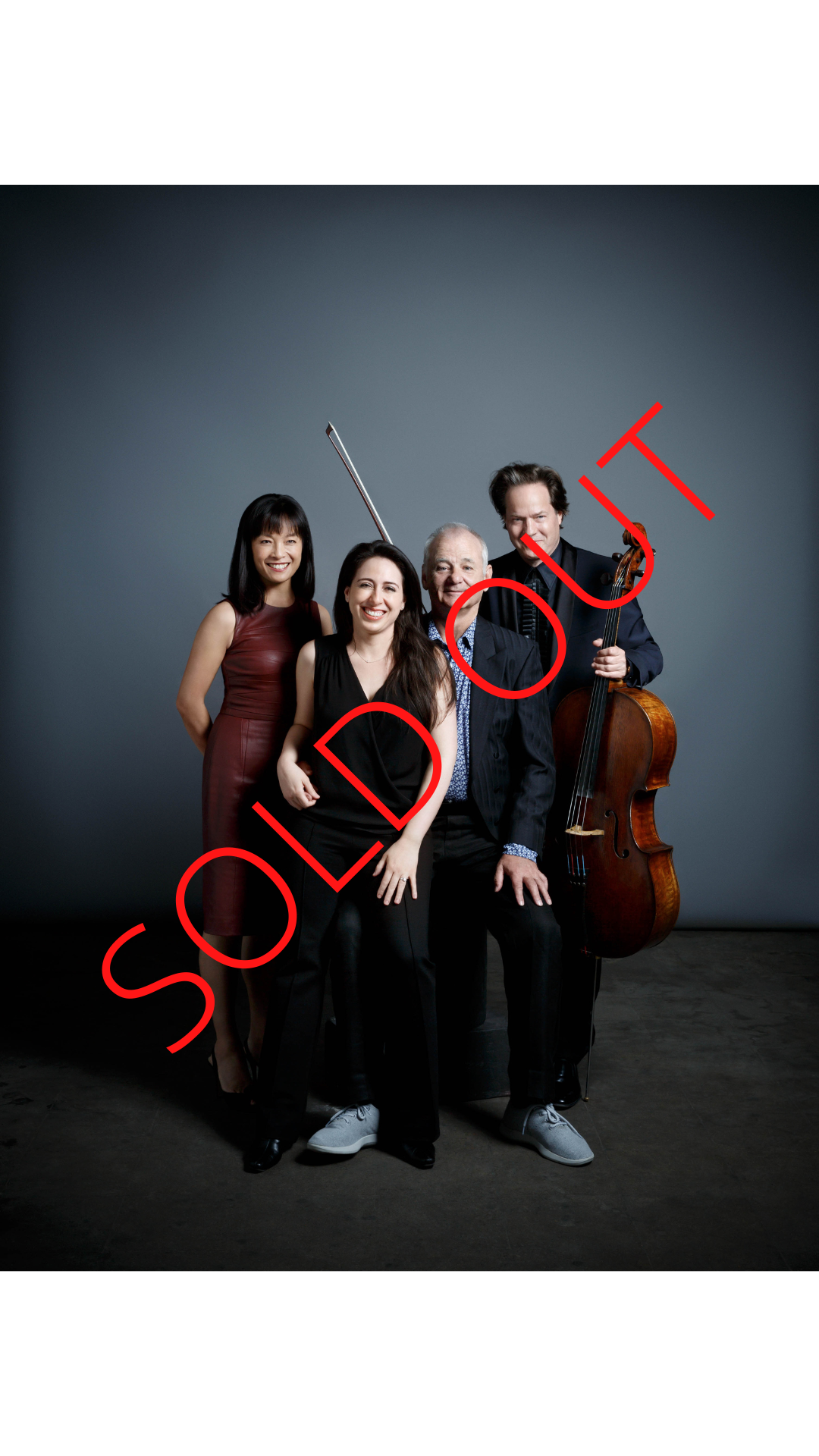 Posted at 20:00h in Events by Julia Boron 0 Comments
0 Likes

The legendary actor and comedian Bill Murray has become one of the most sought after artists in America. He was born William J. Murray on September 21, 1950, in Wilmette, Illinois. After spending time as a member of the cast of Chicago’s famed Second City improvisational comedy troupe, Murray relocated to New York City, where he took his comedic talents to radio’s National Lampoon Hour (1973-74) alongside Dan Aykroyd, Gilda Radner, and John Belushi. In 1975, he was in an Off-Broadway spin-off of the comedy radio show when Howard Cosell recruited him for a show called Saturday Night Live with Howard Cosell (1975-1976). A year later, producer Lorne Michaels tapped Murray to replace Chevy Chase on a much bigger sensation, NBC’s Saturday Night Live (SNL).
Ironically insincere and yet somehow soft-hearted, Murray is the best-known star to emerge from the cast of Saturday Night Live. On SNL from 1977-1980, he created the cheesy lounge crooner, Nick, and other lovably smarmy characters. It didn’t take long for him to move from the small screen to the big screen, and his first major film role was in the 1979 box office hit Meatballs. He then starred in two of the top-grossing comedies of the 1980s: playing a woolly-headed groundskeeper in Caddyshack (1980) and a slicktalking investigator in Ghostbusters (1984, with fellow SNL alumnus Dan Aykroyd). Murray’s comedy hits in the 1990s included Groundhog Day (1993) and the Amish bowling story Kingpin (1996). He also took more serious roles, playing a mobster in Mad Dog and Glory (1993, with Robert DeNiro) and an eccentric businessman in Wes Anderson’s Rushmore (1998), for which he won Best Supporting Actor from both the New York Film Critics Circle and the National Society of Film Critics. He was nominated for a Best Actor Oscar for his seriocomic role as a jet-lagged movie star in Tokyo in Sofia Coppola’s film Lost in Translation (2003).
More recently, Murray earned rave reviews for his portrayal of Franklin D. Roosevelt in Hyde Park on Hudson (2012) and he also reunited with Anderson for a role in Moonrise Kingdom that same year. Murray was also in Anderson’s next film, The Grand Budapest Hotel (2014), with Jude Law and Ralph Fiennes, as well as The Monuments Men (2014). He was nominated for a lead actor Golden Globe® for his role in the comedy St. Vincent (2014), co-starring
Melissa McCarthy and Naomi Watts. That same year he starred as Jack Kennison in the acclaimed HBO miniseries Olive Kitteridge, for which he earned his second Emmy Award. In 2015, Murray was seen in the comedy Rock the Kasbah portraying a music manager who starts to handle the career of an Afghani teen. He recently voiced the character of Boss in Anderson’s acclaimed animated film, Isle of Dogs (2018), and had a cameo role in Danny
McBride’s HBO comedy, Vice Principals.

Recognized not only as an actor, but also as a humorist, Bill Murray was awarded The Kennedy Center Mark Twain Prize for American Humor in October 2016. In 2013 Murray met internationally acclaimed cellist Jan Vogler during a transatlantic flight. Out of the friendship between the two men ‘New Worlds’ premiered in 2017. The show has reconnected Murray with his love for singing, poetry, literature and music. He is an avid golfer and a particular fan favorite at the annual AT&T Pebble Beach Pro-Am. His passion for baseball and golf is just as famous as his ability to turn everything into art, and his eccentric and irreverent style have caused him to be seen by many as a folk hero.

In addition to his classical concert activities as a soloist, Jan Vogler has collaborated with actor Bill Murray for their joint musical-literary project “Bill Murray, Jan Vogler & Friends – New Worlds”. The innovative programme drew international attention and brought together works by Twain, Hemingway, Whitman, Cooper, Bernstein, Bach, Piazzolla, Mancini, Gershwin and Foster for an unexpected and exciting exploration of the relationship between literature and music.

Highlights of Jan Vogler’s career as a soloist are concerts with the New York Philharmonic – both in New York and Dresden at the occasion of the reopening of the rebuilt Dresdner Frauenkirche under the direction of Lorin Maazel in 2005 –, Chicago, Boston, Pittsburgh and Montréal Symphony Orchestras, Mariinsky Orchestra, Sächsische Staatskapelle Dresden, City of Birmingham Symphony Orchestra, Orchestra dell’ Accademia di Santa Cecilia, Vienna Symphony Orchestra, Munich Philharmonic as well as with The Knights.  He collaborates with conductors such as Andris Nelsons, Fabio Luisi, Sir Antonio Pappano, Valery Gergiev, Thomas Hengelbrock, Manfred Honeck and Kent Nagano.

Jan Vogler has been working successfully with the Sony Classical label since 2003 and in the course of this cooperation around 20 CDs have been produced so far. His most recent recording was released in June 2020 with the cello concerto “Three Continents” by Nico Muhly (USA), Sven Helbig (D) and Zhou Long (CHN) with the WDR Symphony Orchestra under Cristian Măcelaru and Shostakovich’s 2nd Cello Concerto with the Mariinsky Orchestra under Valery Gergiev. The CD Songbook with the Finnish guitarist Ismo Eskelinen, released in 2019, expands the repertoire of the unusual combination violoncello and guitar with pieces by de Falla, Paganini and Piazzolla, among others.

Previous recordings include a recording of double concertos for violin & violoncello by Rihm, Brahms and Harbison, together with violinist Mira Wang, the Royal Scottish National Orchestra and conductor Peter Oundjian (May 2018), as well as Schumann’s cello concerto together with the Dresden Festival Orchestra and Ivor Bolton (October 2016), Tchaikovsky’s Rococo Variations with the Frankfurt Radio Symphony Orchestra, conducted by Andrés Orozco-Estrada and the Moritzburg Festival Ensemble (March 2016), Concerti di Venezia with La Folia Baroque Orchestra featuring Venetian cello Concertos from the 18th century from Vivaldi, Caldara, Porpora e.a., the Schumann album Dichterliebe with Hélène Grimaud e.a., and his critically acclaimed recording of Bach’s Six Suites for Unaccompanied Cello. After the success of his CD My Tunes featuring short character pieces, a volume 2 was published. It was followed by an award-winning recording of Dvořák’s Cello Concerto with the New York Philharmonic under David Robertson (Pizzicato Supersonic Award, Diapason d’Or Janvier, Choc – Le Monde de la Musique Mars).

Mira has recorded extensively for many labels including Sony Classical and Edel Classics. Her discography includes violin concerto No. 2 by Prokofieff with the Saarbrücken Radio Symphony, the violin concerto No. 3 by Saint-Saens with NDR Philharmonic Hannover, a duo album with cellist Jan Vogler and several chamber music recordings with Artists of the Moritzburg
Festival.
Mira has been Artistic Director of the Model Room Musicales concert series in New York City since 2005 and in 2013, she became Director of the Moritzburg Festival Academy in Germany, a training program for young musicians that is part of the annual Moritzburg Chamber Music Festival.
Born in China, Ms. Wang studied at Central Conservatory in Beijing. She was sponsored by renowned violin teacher, the late Roman Totenberg to further her studies at Boston University, where she graduated summa cum laude and received the prestigious Kahn Award given to outstanding performers. She has won 1st prizes in several international violin competitions including the Geneva Competition. Mira plays on a violin by Antonio Stradivari that once belonged to Joseph Joachim.

About Venezuelan-American pianist Vanessa Perez, The Washington Post called it right: “Vanessa Perez is not to be taken lightly.” Ms. Perez has been praised for a bold, passionate performing style allied to musicianship of keen sensitivity.
Perez has performed as soloist across the United States, Latin America and Europe. She has performed with musicians such as pianists Gabriela Montero, Ingrid Fliter, cellist Jan Vogler, Violinist Daniel Hope, and conductors Gustavo Dudamel, John Axelrod, Enrique Batiz, Gustav Meier, James Judd, David Gimenez Carreras, and Diego Matheuz. In the studio, Perez joined violinist Joshua Bell for his At Home with Friends album, released by Sony Classical in
2009. She also teamed with Jan Vogler for the cellist’s 2008 Sony
album, Tango.
Vanessa Perez is also the pianist for the project New Worlds, a multifaceted project of music and literature with actor Bill Murray, cellist Jan Vogler, and violinist Mira Wang, which premiered in Dresden in 2017. Their recent performances in Europe, and North America, including Carnegie Hall, have been received to rave reviews, as well as their release on Decca Gold this 2017.

As a solo artist, the pianist has recorded for VAI – “Presenting Vanessa Perez,” and received high praise for her Telarc recording of Chopin, “The Complete Preludes” The Washington Post wrote: “Perez dove into the Preludes as if discovering them for the first time, flinging them out into the hall with a kind of wild intensity that was often breathtaking.” Her most recent recording, “Spain,” was released by Steinway & Sons in 2016, and described by Fanfare Magazine as ” The main thing to note is that the piano is stunningly played and extremely well recorded… this is an enjoyable program, the music making vital, and Perez is clearly a musician of distinction”
Performance highlights have included appearances at the International Keyboard Institute & Festival in New York, the Gilmore International Keyboard Festival, a recent Tour of North America with Violinist Daniel Hope and concerts with the Orquesta de la Juventud Simon Bolívar under Gustavo Dudamel in Caracas as well as Conductor Nikolaj Znaider She was guest
soloist on a tour with the YOA, under the batons of Carlos Miguel Prieto and Jean Philippe Tremblay.
She has performed as soloist in the cultural capitals of Mexico, Brazil, Argentina, Colombia, Uruguay and Peru, as well as North America. She has performed at the Palau de la Música in Barcelona, the Montpellier Festival in France, Konzerthaus in Berlin, the Beethoven-Haus in Bonn, Germany, Wigmore Hall in England, Carnegie Hall in New York, as well as the famed Teatro Colón in Buenos Aires.
Perez has been featured on such radio stations as WQXR New York, WFMT Chicago, Sirius XM, WGBH Boston, Minnesota Public Radio, Texas Public Radio, NPR‘s “All things Considered,” and American Public Media’s “Performance Today.”
Future engagements include performances as soloist in the US, Europe, and a tour with the New Worlds in Australia and New Zealand.

Vanessa Perez is a Steinway Artist