By the second half of the 18th century, any enjoyable meeting of associates or friends would be accompanied by punch. This beverage would often be an alcoholic concoction in which brandy or rum (or usually both!) was mixed with tea, sugar, and some spices and fruits to make it a sweet and delectable drink. Punch was popular amongst many in America, particularly amidst the growing upper class, which would serve punch in social settings. Carried over from England as early as the late 17th Century, punch would often be served at coffee houses, taverns, clubs and regularly even in smaller, more intimate settings. Punch was mixed and served in porcelain bowls of varying sizes, typically imported from China. Bowls ranged from the richly colorful and ornate to the delicately simple and modest. On occasion, there were even examples of bowls being made to commemorate a specific event or person.  Amongst the variety of bowls still in existence, there is a wide variety of examples to view.

The punch bowl in the collection of the Redwood Library is dated circa 1750-1780, and was a gift from Ms. Ellen Townsend, the granddaughter of John Townsend, in 1883. The bowl itself is subtle yet elegant, displaying a series of birds and floral embellishments around the exterior of the item. On the interior, there is a serene scene of a male figure enjoying what appears to be a cup of hot tea, this idea supported by the billow of smoke coming out of the cup. Surrounding the person, there is a set of flowers behind him, and in front of him the table has tea items on it.

From portraits of the period, we can see some of the social depictions of punch drinking. In the first painting below, created by William Hogarth in 1732, a group of men is gathered around a table enjoying their tobacco pipes, and their punch, which was distributed into their glasses via a silver ladle. Several of the gentlemen have had more than their share of punch and the bottles strewn about suggest punch is not the only thing they drank this evening.

In the second painting, Sea Captains Carousing in Surinam (ca. 1752.), there are several punch bowls in action. On the left hand side of the table, there is one individual drinking directly from the punch bowl, which is significantly less refined than the silver ladles, but equally refreshing. A second bowl is being served to a gentleman, and the third is being spilled over another individual’s head. 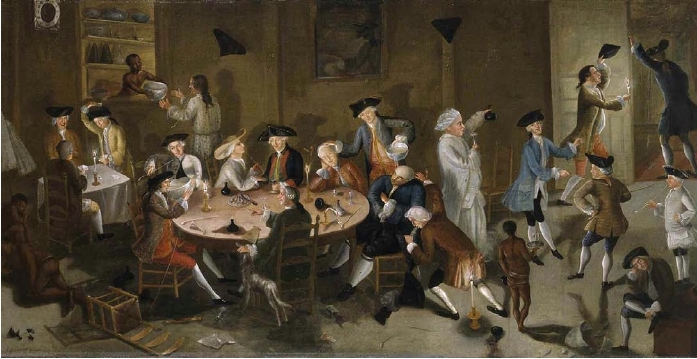 With both of these portraits, it is clear that punch was enjoyed regularly in social settings. These scenes played out in establishments across the western world during the eighteenth century. To get a close up view of the punch bowl, and a wide selection of other special items held by the Redwood Library, join us next Wednesday, February 7th at 6:00pm, for an evening of Redwood Treasures. Registration can be done online here: Registration Link. We hope to see you there!